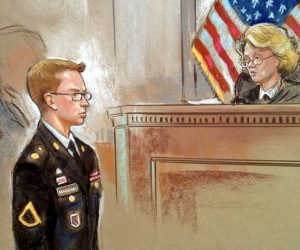 PFC Manning has offered to submit a partial plea in the WikiLeaks case. Specifically, Manning has offered to move forward in the case by pleading guilty by exceptions and substitutions. In the plea, Manning would admit guilt to some of the crimes he is charged with committing. The government is not required to accept the plea. Instead, the Court will determine whether this type of […]

Posted: November 7, 2012
Under: Uncategorized
Read Me